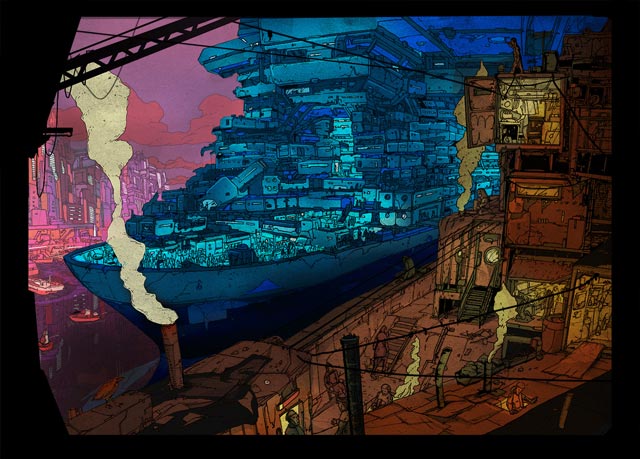 In the not-so-distant future, major upheavals in global political structures spur a new wave of immigration, with a flood of refugees arriving in the Northeastern United States. The primary destination for this population explosion is the Palomar City Metropolitan Area. Imagine York City’s five boroughs quadrupling in size to 38 million people in ten years.

In a disastrous urban initiative, Palomar City is divided into 20 recognized socioeconomic Districts separated by imposing traffic gates. City Hall claims that the Gates control the ever- growing traffic problem, but everyone knows that the gates are a poorly veiled attempt at keeping certain people out. Buckling under the additional weight of this new population, the City’s social structures begin to fail. In the unrest that follows, neighborhoods morph into autonomous city-states and their relationships to and reliance on each other become increasingly tenuous.

The Gates created an impromptu rezoning of the neighborhoods aka Districts. This evolution eventually led to those ‘elements’ that the Council sought to control, taking over the Districts and running them. As districts fell to their own governance they came to be known as Independent Districts, the majority, still governed by City Hall, are called City Districts.

Officially each District is recognized by a number. Unofficially each is known by what body modification (aka Wetwork) – elective, re-constructive surgery, some of which stretch the imagination to its limits – the ruling ‘elements’ are sporting. Identification by stereotype – in- come level, social status, religion or ethnicity – was thrown by the wayside. Your District and Wetwork are the new class.

As every social structure and system fractured, health care took the biggest hit. Most physi- cians moved to the so-called Tiffany Districts, leaving the City hospitals with inexperienced staff and inadequate medical care and equipment to service the majority of the population.

Ambulance service has devolved into an operation not unlike New York City cabs. Known on the streets as sleds, ambulances are rented for twelve-hour shifts by a two-man freelance crew. The teams are paid for every body (aka Drop) that reaches its destination hospital… living bodies earn substantially more than dead ones. Since hospitals are not in every District, a City-wide pass is issued to ambulances so that they can travel from District to District, bypassing Palomar’s convoluted traffic gate system.
Thus Gatecrashers were born.